I walked a Mile in high heels in Calgary last week

So That Cowboy Guy walked a mile in high heels last Thursday in Calgary to raise money for the YWCA WALK A MILE IN HER SHOES®  fundraising event. The event raises funds to help women and their children take steps to walk away from family violence.

The YWCA of Calgary is helping women escape the cycle of abuse, helping children receive the safety, support and nurturing they deserve and helping men learn healthy ways of interacting with their families.

You can still donate by visiting my personal page:

Thank goodness I managed not to twist an ankle, but boy did my feet hurt by the time it was over! Oh, and I might have flashed the judges. 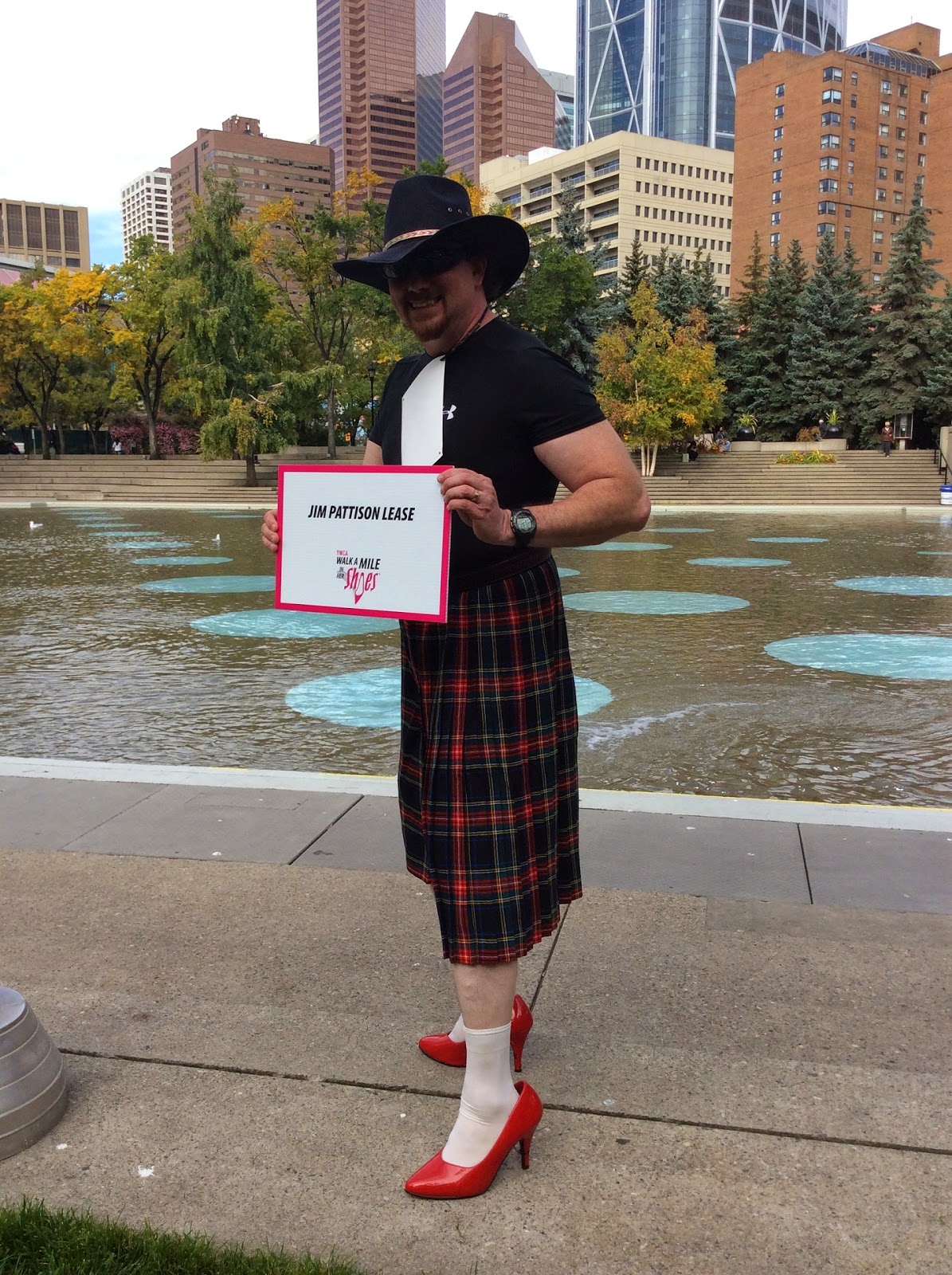 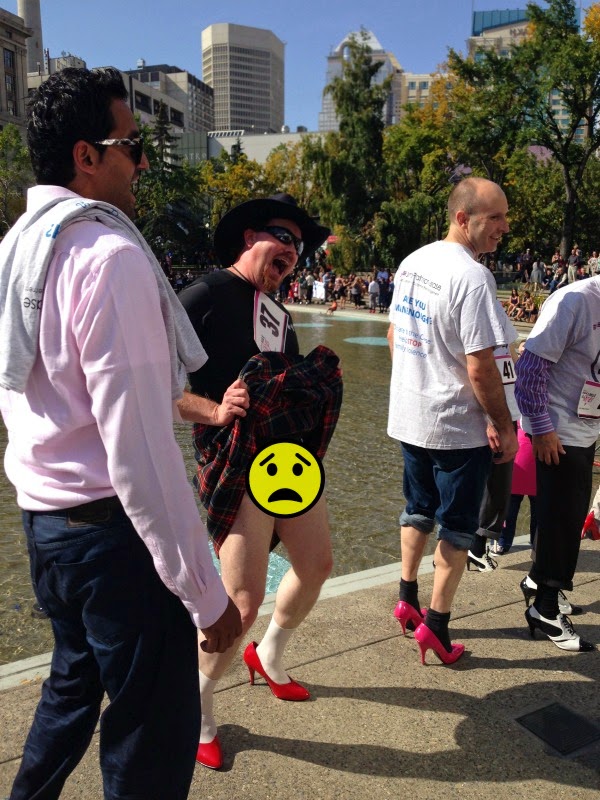 Posted by That Cowboy Guy at 06:46 No comments:

Potential Issue:
The following units now generate income: Building tiles, wall segments, Monuments (no more cubes now), Bridges and Tenants. So this means there is more money in the game. A player with 4 building tiles, 2 walls and a Monument could make $7 with a single Income Generation action. A new player--Jerome?--ended the game with $25 which got him 5 victory points. So my concern is perhaps there is now too much money in the game, at least at the end. I might cut Tenants and Bridges from list.

What I have left was a challenge from Paul Saxberg to make the game playable with 2 players, and I figure I might as well make sure it is playable with 5 players, since the 2-5 Players is the sweet spot for Euros.

To make it a 2 player game I would have to make the game boards double-sided. In a 2 player version the players would remove all the yellow meeples from the game.

• So the City Map board would have no yellow worker row or column, making the board grid 4x4 instead of 5x5.
• There would be 12 squares for placing buildings and 4 river spaces.
• The players would also remove all the building cards/tiles with yellow meeples on them: 10. This would leave 15 buildings/tiles for a 2 player game.
• 3 Building cards would be available each round instead of 5.
• 8 Meeples would be drawn from the bag each round, so each player would have 4 workers to use.
• One less Mason spot for each action space: 1 spot for Bridges per round, 2 spots for Monuments per round, 2 spots for Tenants per round
• One less Mason added per round (Round 1: 3, Round 2: 6, Round 3: 9)

I feel I am getting close to a finalized designed game.

• To place a building on the city map board costs $1, but if it is adjacent to one of your own properties then it cost $1 for every building in the group, including the new one.
• To purchase a building it requires 1 worker and $1
• To use a Mason it starts at $3, then $4 for the next one, then $5 and finally $6
I was worried money would be tight in the game, but for some players it wasn't

I myself tried to construct a building I needed and put it on the board, but then I discovered I had no money to place it. So I spent that turn generating income, at which point the next player bought the building I wanted.

So how do you find the right balance of money in a game? Is it based on how much is left at the end of the game? Or players complaining about not having enough money, or complaining that they don't have enough actions to spend their money on?
Posted by That Cowboy Guy at 10:22 No comments:

Another successful play test session at the Sentry Box

Another great play testing session last night with the GAC gang at the Sentry Box﻿. I feel very comfortable with all the changes I have made and I feel I am just about ready to commit those changes to my rules document.

What I have left was a challenge from Paul Saxberg﻿ to make the game playable with 2 players, and I figure I might as well make sure it is playable with 5 players, since the 2-5 Players is the sweet spot for Euros.
Posted by That Cowboy Guy at 13:17 No comments:

Yet more changes for Meeplesburg

A new design suggestion which I want to implement before the next play test:

Each wall section will have two spaces next to it: 1 for Income Generation and 1 for Wall Construction.

So instead of having only 1 spot for activating Income for a row, you would now have 2. This change would make these actions more intuitive, more elegant and work better thematically.

Here are some more suggestions that will not be implemented, but are sitting in the hopper and may be used depending on how the changes above affect game play:

Instead of the Monuments being worth Victory Points at the end of the game, the player gets a  card from a bonus deck

Every time a player builds a new Monument and places it on one of their buildings, they get to draw 2  cards from a bonus deck, keep one and place the other at the bottom of the deck.

So at the end of the game, players would announce the bonus Victory Points they received because of the building tiles they owned that matched the Bonus card. The player who bought the last Monument would not have choice of bonus cards. So another incentive to buy Monuments early because they could buy building tiles that matched their bonus cards.

To make the Purchase Area make more sense thematically, the player needs to supply a worker and $1 to get a building from this area.

This means it will cost a player a minimum of $2 to place a purchased building tile on the city map board: $1 for the purchase, and a minimum of $1 for the Land Levy to place it on the board.
Posted by That Cowboy Guy at 12:30 No comments:

So I had another great play testing session last night for my game Meeplesburg. We played a 3 player game that lasted 68 minutes, which included a quick rehash of the rules--so it looks like this came can come in under an hour for experienced players. w00t!

Here are some the key changes from the last version:

1. Get rid of the remaining 60 white and instead make the Monuments worth victory points at the end of the game.

So in the last version of the game I got rid of 120 coloured wooden cubes and replaced them with money tokens (40 $1 tokens and 12 $5 tokens). And that was a great change. It reduced the component count of the game and gave players more action choices during their turn. It was easier to figure out what you needed to perform a given action.

Well now I was given a suggestion that would eliminate the 60 white cubes, which were generated by the Monuments during the Income Generation action, and instead make the Monuments themselves worth victory points at the end of the game. So here  the changes:

2. Limit the number of Masons that can be placed on Action spaces during a round.

In order to tighten up the game and build more tension, it was suggestion that I limit the number of Masons that can be placed an action space during a round:

In previous play sessions, players would leave adding tenants and constructing bridges till near the end of the last round since there was no sense of urgency to build them earlier. Now that there are limited spots available per round, players will have to consider building these in rounds 1 and 2 to avoid not being able to build them at all.

In the play test last night, all Masons cost $4 in order to use them on an action space. It didn't matter if the player used the first available Mason or the last one. So the change will be this:

So the longer you wait to hire a Mason, the more expensive they become.

4. Having 2 walls in a row or column gets you $2 instead of a white cube

Since I am removing the white cubes from the game, owning 2 walls in either a row or a column will give you $2 during the Income Generation action.
Posted by That Cowboy Guy at 12:52 No comments: