The CDC: Biosafety Level 4 - VPG - They want the rules.

I got a a reply back from Victory Point Games:

This game does sound very intriguing to me. I'd love to hear more. Do you have rules written up? If so I'd love to see them.


So I let him know that I need a couple of days to polish up the rules and also that I would Photoshop some illustrations to put into the game.

Wish me luck!
Posted by That Cowboy Guy at 07:35 No comments:

So I pitched my first game...and it's not Where's My Lugagge?

So last night I pitched my first boardgame design...and it surprisingly enough it was not for my family game Where's My Luggage?

It was for the game I meantioned in my previous post: the Vaccine game...or as it is now called: The CDC: Biosafety Level 4! (at least for now...)

So I had posted about this blog on the Geek (BoardGameGeek for those of you who are not in the know...)

I got alot of postive response, including from Steve Carey who designed We Must Tell the Emperor, and from Alan Emrich, the owner of Victory Point Games.

So they suggested I pitch my idea to them...so I did!

Here is roughly the text of my email:

Alan Emrich told me to shoot you an email regarding a game idea I'd like to pitch to Victory Point Games. After he found out that Steve Carey said I was on to something, then Alan said "heck yes we're interested in it!"

I am a first-time game designer and I would like a chance to "show my stuff." I read the articles that Alan pointed me to, so here is my game idea pitch... :: takes a deep breath ::
1.      Contact information
John Gibson
Email: ThatCowboyGuy@gmail.com

4.      One-Sentence Marketing Description
“With the world on the brink of virulent catastrophe, the scientists of the CDC BIOSAFETY LEVEL 4 Lab have 10 weeks to create a vaccine to combat an ever mutating virus or risk the survival of humanity itself. ”

5.      The game’s Hook
Biosafety Level 4 is a solitaire boardgame that pits the player against an ever mutating virus. They must create a vaccine to destroy the virus within 10 weeks, but they have limited resources and funding. The more successful they are at decoding the virus’s genetic structure, the more funding they can secure to combat it.

6.      Word’s-eye-view of the game
“In Biosafety Level 4, the player must use their limited resources to find a cure for a deadly virus ravaging the outside world. They must unlock its genetic code, finding proteins that they can use to create antibodies to bind to its antigens, thus destroying it. Each turn the virus mutates unpredictably, while the player buys and uses lab equipment that will aid in unravelling its code. Funding is limited so resource allocation can be challenging, but with each success will come more funding. Will the men and women of the Biosafety Level 4 Lab create a vaccine to save humanity before time runs out? ”

7.      Back of the box style listing of the games key features
•         11” x 17” color game board with virus play area, vaccine creation area, funding track and a 10 week turn track
•         25 antigens markers: the building blocks of the virus
•         50 antibody proteins: join these in different combinations to bind to the antigens and thus destroy them
•         20 Viral Mutation Cards that add more antigens to the virus or change existing antigens
•         16 Lab Equipment Cards that can be purchase to aid in combating the virus
•         1 die used to determine the success or failure key research points
So that's my pitch. I hope it has piqued your interest. I look forward to your response.

So there you have it. My first game idea pitch...I hope it goes over well. I will post about it one way or the other.

Thanks for reading.
Posted by That Cowboy Guy at 11:33 2 comments:


Update #1
Lab Equipment Cards
The player can only perform 3 Equipment actions per turn. They can only use a piece of equipment once per turn. After an equipment card is used, turn the card sideways so the player remembers that it has been used. As part of clean up all equipment cards are returned to their normal orientation
Destroying Antigens
An antigen can only be destroyed if both of these conditions are met:
Posted by That Cowboy Guy at 16:17 No comments:

Email ThisBlogThis!Share to TwitterShare to FacebookShare to Pinterest
Labels: Vaccine

Where's My Luggage? - a different way to play

Here is a comment I got from someone with experience in game design:


If you can get the carousel to move faster, I can see that adding further drama and panic to that version of the game, which is probably a good thing.

So after reading that I just had an epiphany: Instead of speeding it up, add a cover with four even sized triangular open spaces, similar to the Umbrella Corporation logo, where the white triangles are covered and the red triangles are open to the players. 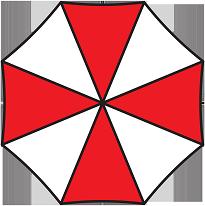 So what happens is that the player can only grab suitcases from the opening in front of them. So they are experiencing panic and drama trying to look for the suitcase that matches as it passes into view. And of course they have to be quick enough to snatch it before it disappears from view.

In this version I could make all the suitcases look different--and double-sided with no contents--and players could look at all the passenger cards in their hand and try to look for any of the suitcases that match them. I would then get rid of the "Lost Suitcase" tiles. So here it is in point form:

Ummm...after further thinking I must scrap this idea since little fingers could be trapped under the edges of the cover trying to reach for a tile that is about to go under...it would be a lawsuit waiting to happen...
Posted by That Cowboy Guy at 07:46 No comments:

Where's My Luggage? - The Rules


The Fantasy Land Airport is the busiest terminal in the Universe! Flights from every point in history and every dimension are arriving all the time, so the baggage claim area can get quite crazy. Since many suitcases can look alike, passengers need to be extra careful the luggage they grab is the right one! Unfortunately the airlines occasionally lose luggage, so some passengers will go home empty handed.


This game is for 2-4 players, ages 8 and up, and takes about 20 minutes to play.
Each player has a deck of passenger cards that they must help to find their matching luggage. The game is played over 3 rounds, and at the end of the game, whoever has correctly matched the most suitcases is the winner. 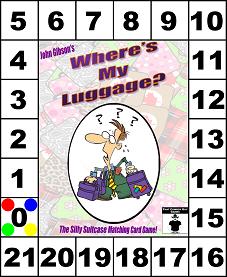 
Everyone chooses a pawn and places it on the 0 spot of the scoreboard track. Take the passenger deck and shuffle it, then deal out 7 cards to each player face down.


Set the remaining cards aside. Each player takes their cards and places them in a single pile in front of them, face down; this will be their Draw Deck.


Take all 36 luggage tiles and place them inside the luggage carousel. Spread them out evenly, pattern side up so you can't see the contents. Then place the carousel in the center of the table and turn it on.


The game is played over three rounds. Each round is played the same.


Everyone puts a hand on their Draw Deck and yells "WHERE'S MY LUGGAGE?", and the round begins. At the same time, each player takes the top card from their Draw Deck, flips it over and places it face up next to it to make a new pile; this is their Action Deck. Each card has a picture of a passenger plus a picture of the luggage they are looking for.


Each player should now reach into the rotating carousel and try to find a suitcase tile that matches the type on their revealed passenger card (Remember: 
If the luggage matches their passenger, then congratulations!


Take the passenger card and the matching luggage tile and place them off to the side near you. Note: You will check them at the end of the round to make sure they are a match. 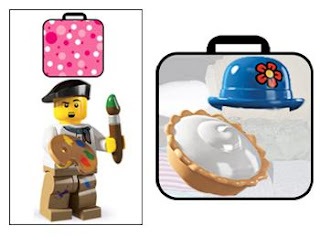 The luggage belongs to another passenger


If the luggage belongs to another passenger, then return the tile to the carousel, face down.


Now draw your next passenger card off the Draw Deck, place it face up on the Action Deck and continue playing. NOTE: You cannot grab another tile for the same passenger at this time. 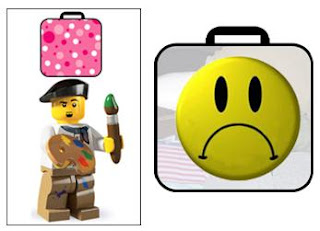 The luggage was lost


Take the passenger card and the lost luggage tile and place them off to the side near you.


When your Draw Deck is exhausted, flip over your Action Deck (making it your new Draw Deck) and continue playing. If you only have one card left, then you don't have to keep flipping it over anymore.


Everyone is playing as fast as they can, trying to find their matching luggage. When the first person runs out of passenger cards, they yell "Done!" All the other players must stop playing; they cannot look for any more matches. Make sure to turn off the carousel to save on the batteries. 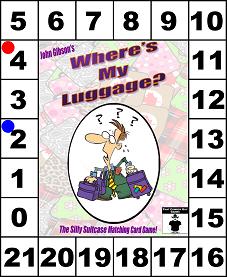 
For every correct match of passenger to their luggage, the player scores 1 point. Everyone should have another player check their matches to see if they are correct. If they have an incorrect match, or lost their luggage (frowny face tile), then they don't score any points for that passenger. Players advance their suitcase marker on the scoring track of the score board the number of points they scored that turn. Example: The Red Player scored 4 points and moves their pawn up to the square marked 4. The Blue Player only scored 2 points, so they move their pawn up 2.


If it is the second or third round, add the new points scored to the track.


If it’s not the end of the third round, setup the game again for a new round. Return all the passenger cards--including the ones set aside if they were not all dealt out--shuffle them, and then deal out 7 new cards to each player. Return all the luggage tiles to the carousel, pattern side up, and mix them around so you don't know which suitcase is which, then turn it back on.


The game ends at the end of the third round. Whichever player scored the most points wins the game. If there is a tie, then all tied players win!


For younger players, you can play with less passengers/luggage tiles. For example, you could play with only 3 passengers of each luggage suit. Remove all the luggage
tiles that don't match these passengers from the game. You would also remove the six Lost Luggage tiles (frowny face) from the game. Set out all the suitcases in 3 rows of 6 suitcases. The players then take turns flipping over one luggage tile at a time. Then they have to remember where it is if it doesn’t match.


John "That Cowboy Guy" Gibson dreamt up this game during a car ride to his weekly board game night on Tuesday, September 13, 2011.


http://www.thatcowboyguygames.com/
Posted by That Cowboy Guy at 11:27 No comments:

Here is the YouTube Demo Video for my board game prototype: Where's My Luggage?

Please watch it and give me feedback. I am very interested to hear the opinions of people who do not know me personally.