The game would come with 36 double-sided molecule tokens. All tokens would have the same back, so you wouldn't what molecule it was until you flipped it over.

All molecule tokens have 3 features: 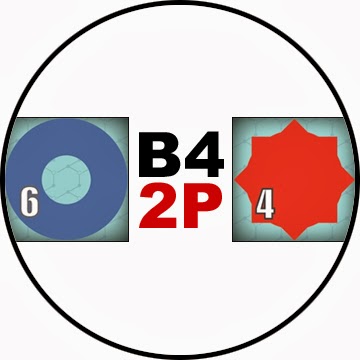 1. They would display the proteins the player needs to roll on their dice in order to target and destroy that molecule. Molecules can have 2-7 proteins displayed, depending on how many players are playing.

2. They show a default starting hex (for example B4). This is the hex the token will placed in when adding tokens during the Mutation Phase. The Mutation happens twice during the game when the sand time runs out and you have to add 3 more molecules to the game. So the molecule above would be placed on Hex B4. If Hex B4 already has a molecule, then it gets replaced.

3.They show the number of players required in order for the molecule to be included in the game: 2 players (includes 1 player), 3 players and 4 players.
Posted by That Cowboy Guy at 12:16 No comments:

I have started working on a design on a version of INFECTION: Humanity's Last Gasp by VPG that will be a custom dice, real-time, multiplayer cooperative board game.

This would be a game inspired by such real-time games as Escape: The Curse of the Temple by Queen Games and the Engelsteins' Space Cadets by Stronghold Games.

Escape: The Curse of the Temple

It would be for 1-4 players (so yes, it would still play as a solitaire game!!!)

I am tentatively titling the game Infection: Countdown to Extinction.

The game would have 16 custom dice, 4 each of 4 different types. It would also have a game board, player pawns, cardboard tokens, and a 3-minute sand timer.

The game board would be a larger version of the virus from INFECTION (no vaccine or incubator areas) and players would place their pawns in the center hex (A1). 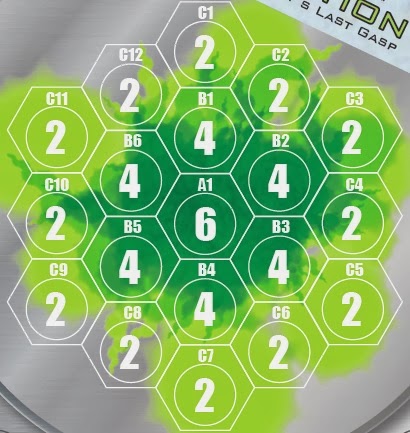 Different molecules would be placed on the other 18 hexes (number depending on how many players were playing). One player would flip over the sand timer, and then all the players would roll their set of 4 dice to move to other hexes and try to roll the proteins needed to cure that molecule in that hex. 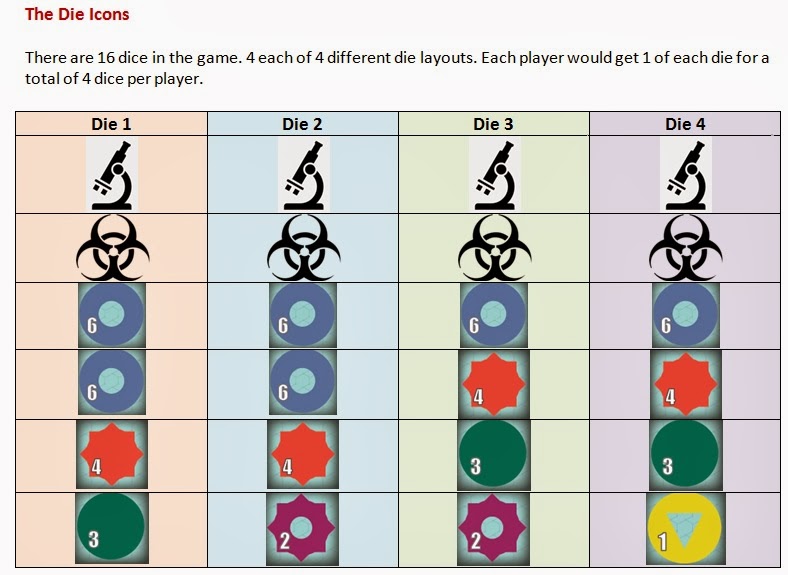 Three times during the game the sand timer runs out. The first two times 3 new molecules will be added to the board in random hexes. They might even replace a molecule a player was working on destroying.

If the players don't destroy all the molecules on board by the time the sand timer runs out the third time, then they have lost the game.

At 12:10 AM on Wednesday, January 22nd, 2013, we put our beloved dog, Pippin, to rest. He fought a brave fight with medication and eventual transfusions but his little body couldn't survive the onslaught of attack to his red blood cells.

He was a nine year old, miniature poodle who had a very adventurous, highly intelligent and loving spirit. His love of play and people was infectious and helped Karen and I to live in the moment and cherish nature and all creatures great and small.

Some may say we just lost a dog but our hearts are telling us that we truly just lost our precious child. We will miss him greatly. 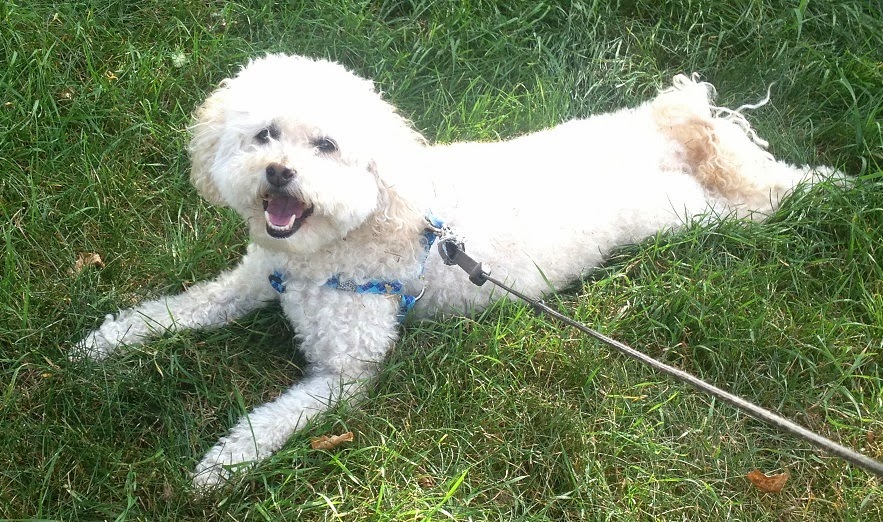 Posted by That Cowboy Guy at 12:12 No comments:

There are eight double-sided Researcher/Creature player boards, one for each playable character in the game. Each card would have the following attributes:

Posted by That Cowboy Guy at 13:56 No comments:

Sooo...ahhh...as you can tell I haven't been updating this blog on a regular basis, so I am going to try to remedy that by trying to post at least once a week.

So I am working on a new game this year, and it will be a  multiplayer hidden traitor cooperative game tentatively titled Terror in Antarctica. It is a game inspired by the movie John Carpenter's The Thing (1982)

Here is what I have written so far as notes for the game:

Terror in Antarctica is a 3-8 player Hidden Traitor game that takes place in a remote Antarctica research station - Outpost 13. One or two players play shapeshifting aliens (Creatures) and the other players play the men and women living in the station (Researchers). The furnace has been destroyed and Researchers are trying to repair equipment sabotaged by the Creature before they freeze to death. The Creature is hiding in their midst, disguised as a Researcher, trying to thwart their plans and convert other Researchers into Creatures themselves.

The game board is mainly the layout of the Antarctica research station Outpost 13. Here is a list of the following features of the board:
·         6 Repair Objective Rooms: These rooms are the locations that Researcher players will need to go to in order to repair sabotaged machinery necessary for their survival. Each room has a name. They are identified by a broken gear icon, which also has the number of player required for that room to be in effect for game. The Creature players will also need to go to one of these locations in order to build their escape craft, which be under the floorboards of that location.
·         10 Item Card Rooms: These rooms have a card icon, indicating that when a player enters that room, they must draw a card from that room's deck.  Each room has a name.
o   8 of these rooms will have an icon indicating it is the starting location for one of the 8 Researchers.  Each Researcher will have their own icon indicating their role/occupation at Outpost 13.
o   There will be icons indicating how many Researcher Attack Tokens are placed in this room at the beginning of the game, depending on how many players are playing. This can number from 0 to 3 tokens.
·         Hallways: Players must count every square in the hallways when moving from room to room.
·         Ducts: Sub Creatures Crawling Arms might move through ducts to other rooms if there is a draw when fighting Researchers.
·         Exterior Buildings: There are some exterior buildings that can only be reached if a Researcher has a parka. The spaces between buildings are counted the same as hallways for movement.
·         Round Track: This is a 20-space track used to keep track of Rounds in the game. At the 11 round point players lose one movement point because of the intense cold. The Researchers lose the game if they do not eliminate all the Creatures at the end of round 20.
·         Item Deck Slots: There are 10 slots at the bottom of the board, 1 for each of the item rooms. These slots are labeled with the name of the room. Each slot will start the game with an equal number of item cards in deck--10 decks in total.
o   3-4 Player game: 4 cards in each room deck
o   5-6 Player game: 6 cards in each room deck
o   7-8 Player game: 8 cards in each room deck

The game's pieces are used to represent Sub Creatures, Researcher Attack tokens, Repair Tokens, Hit Point Tokens and to track the Round Track.

Sub Creatures
There are 36 Sub Creature tokens: 6 Mutated Sled Dogs, 12 Upside Down Head Crabs and 18 Crawling Arms. These monsters are autonomous appendages of the main Creature, and are revealed when a player draws a card from a room deck after entering a item room. These Sub Creatures will attack Researchers in the same room as them. When a Sub Creature is revealed to be in a room, a Sub Creature token(s) of that type is placed in the room.

Researcher Attack Tokens
These are double-sided tokens that are placed in item rooms during the setup of the game. On one side of the token it shows an icon representing how many players in the game it will be used in. On the other side it will show either a single attack icon or a double attack icon. The player who collects the token then chooses the attack card of their choice of specified type: single or double. They can chose either Rock, Paper or Scissors. If the type they want is gone, then they will have to choose another type.

Repair Tokens
These double-sided tokens are drawn by players when they attempt to repair a Repair Objective. There are 2 types of Repair Tokens:
·         10 Fixed Tokens
·         10 Broken Tokens
Both tokens have the same icon on the back. These tokens are put into a pile near the board, generic side up. When a player repairs a Repair Objective, the draw 2 of these tokens and views them secretly. If they are Researcher Player, they will want to play a Fixed token to the room. If there are no Fixed tokens then they will have to play a Broken token. They will place one token on the room and replace the other one to the pile, face down and mix it back in with the rest. If the player is the Creature, they may want to play a Broken token and claim they were both broken tokens. Or they could play a Fixed token just throw the other players off their track.

Round Track Marker
The round track marker is placed on the 1 spot of the Round Track, and is advanced once every round.

There are three different types of cards used in the game: Infection Status Cards, Item Cards and Attack Cards