A new milestone: I am now Ranked on Board Game Geek


So I reached another milestone this morning. My board game Infection: Humanity's Last Gasp is now officially ranked on the Board Game Geek website. I reached 30 ratings with an average rating of 7.98, which ranks me 4302 out 9000 games. Not too shabby, eh? 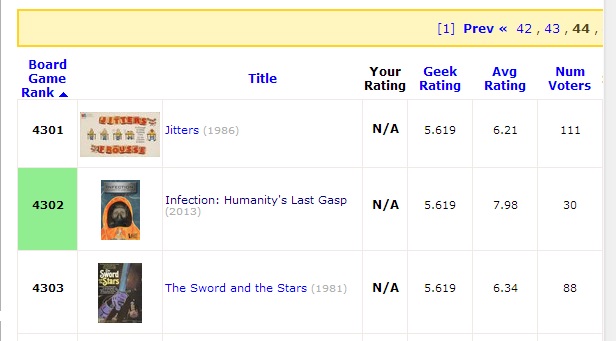 You can check out my game page on BoardGameGeek by clicking on the link below:

Generating more Buzz for Infection, plus some ramblings about the promotion process in general

So how do I go about generating more buzz for my game? Currently there are 4 podcast reviews, 1 video review, 1 written review on BoardGameGeek, 2 reviews outside of BGG (1 in Russian) and finally an upcoming review in Counter Magazine.  Currently my game is in the top 10 selling games at Victory Point Games.

Some reviewers say this game hasn't gotten a lot of buzz, and it should deserve more. So my question is how to I generate it? It's a solitaire game so I know that limits the market for this game. It has been compared to Pandemic, which can be both a good thing and a bad thing: gamers who like the theme of fighting a virus may be drawn to it and check it out, whereas other players might think it is a Pandemic knock and not give it a second thought.

So what have I done so far to generate buzz myself? I have contacted most of the major podcasters, 4 of which have reviewed or at least discussed my game. I feel have promoted the heck out of it on BGG (am I getting to annoying?...Don't answer that!). I have been quick to respond to any questions or comments regarding Infection in the forums on BGG. I am also using Facebook quite a bit. I have done some Tweeting, but there is only so much you can say in 140 characters without spamming people. I have this blog, which I admit I don't update frequently, plus I have my own website as well--not updating it much either. I don't know if pouring my energies into the blog and website will do much if people don't know I exist.

That being said it is selling well relative to other VPG titles so I guess I shouldn't complain. If I am planning to be in the industry for the long haul then slow and steady wins the race, eh? I guess what I am getting at in this whole post is I guess I feel I might not be doing enough...that I need to self promote more...but I don't know what more I can do that I haven't already done. I am enjoying what has happened so far. I love the feedback I have gotten (not one bad review yet!) and I love answering questions and just generally sharing.

Right now game design is a hobby, but it is a hobby I am sharing with the whole world. People are buying and playing my little game in Spain, Poland, Great Britain, Germany, France, etc. and that is sooooo fricken cool! I have a lot more game designs in the pipeline and I can't wait to share them with all of you out there. I have learned so much from designing, developing, publishing and promoting Infection and I want to put those lessons into action in the future.

So yeah, this post was a bit rambling, but I just wanted to share both my joys and some frustrations. I know this game is good--pretty well a solid 8 so far in the ratings--and I would just like more people become aware of it so then might have a chance to enjoy it too.

Thanks for reading, and as always, any feedback is appreciated.

So what have you been up to, Cowboy Guy?

By May 28th I had broken into the top 10 selling games for the month:

On June 11th I had the top selling game for the month:

By the end of June I had sold over a hundred copies.

By July 24th Infection had broken into the top 10 selling games for the year, and it had only been on sale for 2 months:

Solitaire gamers from all over the world have bought my game: Canada, USA, Russia, Germany, Poland, France, Denmark, etc.

My first written game review was in Russian: http://tesera.ru/game/Infection_Humanitys_Last_Gasp/

I have since had my game reviewed--or at least discussed--on three different podcasts:

On Board Games: OBG 111: All Alone With Friends
http://onboardgames.net/

As of today, Friday, August 2nd, I am working on an expansion for Infection.

Here are some ideas I have had:

As I start to close in on 350 sales of my solitaire board game Infection: Humanity's Last Gasp, I need start thinking about making an expansion.

So I have an idea: The expansion would add a second player to the game, and they would play the role of the virus. The suggestion for the expansion name comes from one of the losing conditions in the current rulebook:

Infection: Virus with a Brain

The challenge would be to make a balanced but asymmetrical game play between the two players.

This expansion would add a campaign to the game, still keeping it a strictly solitaire game. There were would be 8-10 scenarios, each one getting more progressively difficult to defeat. It would use a small board displaying a map of the world with 8 to 10 locations marked by circles on which you would place a marker indicating your current location. The first location would be in Zaire (easiest scenario) and the last location would be in Atlanta, Georgia (hardest scenario). Half of the scenarios would use the Bacterial side of the board and the second half would use the viral side.

The expansion would add 25 cards and roughly 35 new tokens (quarter sheet) to the game. There would be a smaller board (8 1/2" by 5 1/2" ) added with a map of the world, plus a rulebook for the expansion.

These new components would be comprised of the following:


The rulebook would set out each scenario, describing what new tokens and cards to add, or which ones to remove from the base game. Scenarios could be played as one-offs in any order that the player wishes, or as a campaign where the player plays each scenario in order, starting with Zaire and ending in Atlanta.

Some scenarios might require the player to count out 15 status report cards, face down, the add a special new Status report card mixed into the bottom 5. This card would signal the end of the game, so the player knows they have at least 10 turns to beat the game, but after that it would be up to chance.

Each scenario would have a paragraph or two of flavor text describing the situation and the location in the world. Some scenarios would introduce a new personnel card that might only be used in that situation (a local helping out the team that flew in).

Some of the more difficult scenarios would add a 2nd  7-hex virus to the game. When a Status Report card says to place a molecule on hex B4, and B4 on the main virus is occupied, then place the new molecule on the secondary board. If the secondary board is populated, then the player receives an additional -1 to their containment check die roll.